Skip to main content
2021
Tal Ulus. 10/29/2021. “How long and how strong must a climatic anomaly be in order to evoke a social transformation? Historical and contemporaneous case studies.” humanities and social science communication , Pp. 1-12.

ulus_et_al-2021-humanities_and_social_sciences_communications.pdf
Michael Storozum, Ido Wachtal, Johannes Lotze, Dan Golan, Zhidong Zhang, and Gideon Shelach-Lavi. 9/23/2021. “Mapping the Medieval Wall System of China and Mongolia: A Multi-Method Approach.” Journals Land , 10, 10. Abstract
The Medieval Wall System of China and Mongolia is one of the longest wall systems in the world, but its specific chronology, function, and purpose remain ambiguous. Constructed at various points throughout the 10th to 13th centuries CE, this network of walls, forts, and enclosures covers an estimated 4000 km and spans a wide range of ecozones, from the deserts of western China to the steppes of northern Mongolia and the Khingan mountain range. In this article we used historical atlases, topographic maps, and an array of different kinds of data derived from satellite remote sensing, to produce one of the first accurate maps of the Medieval Wall System. Through this large-scale mapping program, we are now able to evaluate previous work that estimates the length of the wall system and different areas of construction. By measuring the structures associated with the wall and the length of the wall itself, we identified at least three different areas of construction along the Medieval Wall System. Future studies may be able to use similar tools to develop more accurate maps of other wall systems throughout Eurasia to further advance the comparative study of ancient wall systems.

The osteological study of eight well-dated horse skeletons from Xinjiang (350 BCE) is reported as an important discovery: the earliest direct evidence for horseback riding in China. However, the sites are located roughly 2,000 km from the centers of Chinese civilization, where evidence for domesticated horses predates these skeletons by some 1,000 years, and artistic depictions of horseback riding appear some 400 years earlier than these skeletons. Horses in China were extensively used for charioteering: The duke of Qi’s tomb complex in Shandong (490 BCE) included several hundred sacrificial horses. Why, then, is this discovery so important?

Its importance, we argue, lies elsewhere: the beginning of cavalry warfare, a phenomenon that changed the geopolitical makeup of this region for the next two millennia. The occurrence rate of vertebral abnormalities suggests extensive exploitation, which is commonly attributed to excessive horseback riding, and their dating correlates with the onset of cavalry warfare on China’s northern frontiers.

cavalry_and_the_great_walls_of_china_and_mongolia.pdf
2020
Gideon Shelach-Lavi, William Honeychurch, and Amartuvshin Chunag. 7/8/2020. “Does extra-large equal extra-ordinary? The ‘Wall of Chinggis Khan’ from a multidimensional perspective.” Nature, Humanities and Social Sciences Communications, 7. Abstract
This paper focuses on a hitherto little-known long (or “Great”) wall that stretches along 737 km from northern Inner Mongolia in China, through Siberia into northeastern Mongolia. The wall was constructed during the late medieval period (10th to 13th century CE) but is commonly called the “Wall of Chinggis Khan” (or ‘Chingisiin Dalan’ in Mongolian). It includes, in addition to the long-wall itself, a ditch feature and numerous associated fortifications. By way of an analysis of this impressive construction we seek to better understand the concept of monumentality and in turn shed light on the wall’s structure, function and possible reasons for its erection. We pose the interesting question of whether any construction that is very large and labor intensive should be defined as a “monument”, and if so, what that definition of monumentality actually entails and whether such a concept is useful as a tool for research. Our discussion is relevant to the theme of this collection of papers in that it addresses the concept of the ‘extraordinary’ as conceived by archeologists. Following our analysis and discussion, we conclude that although size and expenditure of energy are important attributes of many monuments, monumentality (i.e., expression of the extraordinary) is not a binary “either-or” concept. Rather than ask whether the “Wall of Chinggis Khan” was or was not a monument per se, our analysis reveals aspects in which it was indeed monumental and extraordinary, and others in which it was not extraordinary, but rather an ordinary utilitarian artifact. 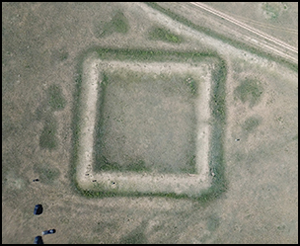 The long walls of China and the Eurasian Steppe are considered to have functioned as either defensive structures against aggressive nomadic tribes, or as elements to control the movement of local nomadic groups following imperialist expansion. This article focuses on a hitherto understudied 737km-long medieval wall running from northern China into north-eastern Mongolia. Built by either the Liao or Jin Dynasties, the wall features numerous auxiliary structures that hint at its function. In research relevant to interpreting other Eurasian and global wall-building episodes, the authors employ extensive archaeological survey and GIS analysis to understand better the reasons behind the wall's construction, as well as its various possible functions.